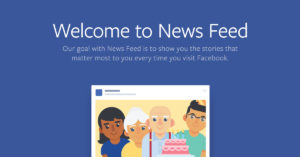 [Can’t stand the pressure from endless promotions, and payable content? Nobody can!]

Have you heard about the EdgeRank? If you ever logged into Facebook not just to muck about on your friends page – I’m sure you defiantly understand what we are going to talk about.

EdgeRank – is Facebook algorithm to determine what articles should be displayed in a user’s News Feed. So, before asking where have all normal Facebook posts gone – you should understand how it works!

And though officially this term is no longer in use – the new algorithm doesn’t have such a catchy name so everybody keep calling it EdgeRank. A few years ago after some psychological experiments, held by Facebook showed up in some trustworthy resources like The Guardian and after removing most of organic factors EdgeRank “lost his reputation” and Facebook had to replace it with something new. So the next time you’ll have to talk about how Facebook selects and ranks the content for the News Feed, you’ll need to do it without using the word EdgeRank – to be relevant it terms.

Facebook Insists that their new algorithm takes more than 100,000 factors into account – they really added a great amount of new features, but the foundation stays the same. And in spite of the fact, that many respectable marketers including but not limited to Marshall Manson – the Managing Director of [email protected] (in his article: “Facebook Zero: Considering Life After the Demise of Organic Reach…”) buried the organic Facebook engagement in 2014 already, still there are things we can pay attention to.

– use payable methods together with organic!

– organize it in full and for the minimum time amount!

48
48 points
Marketing and SEO specialist in Px-lab and Novembit. Love what I'm doing! Would like someone to invent the charger for me - not to waste time on sleep. But with the feature: "sweet dreams" for some 15 min inspiration! Do you know someone, who can do that? Let me know!
https://px-lab.com

Connect with:
Facebook Google Twitter
Don't have an account?
sing up
Back to
log in
Connect with:
Facebook Google Twitter
Back to
log in
Choose A Format
Personality quiz
Series of questions that intends to reveal something about the personality
Trivia quiz
Series of questions with right and wrong answers that intends to check knowledge
Poll
Voting to make decisions or determine opinions
Story
Formatted Text with Embeds and Visuals
List
The Classic Internet Listicles
Countdown
The Classic Internet Countdowns
Open List
Submit your own item and vote up for the best submission
Ranked List
Upvote or downvote to decide the best list item
Meme
Upload your own images to make custom memes
Video
Youtube, Vimeo or Vine Embeds
Audio
Soundcloud or Mixcloud Embeds
Image
Photo or GIF
Gif
GIF format